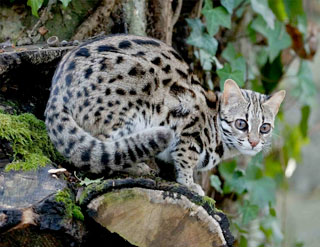 The leopard cat is cat sized and shaped, with a well-balanced carriage and build. Its coat varies in ground color from grey to red with white or very light underparts. It is randomly patterned with dark brown or black spots over its entire body. Its head has strong black and white striped markings.
The leopard cat may be found all over southern and central Asia from India to the Philippines, Mongolia, Manchuria, Siberia and Japan, where it hunts by night or day, from trees, and seeks game birds, fish, squirrels, hares, and other small animals.
One interesting fact about the leopard cat is that is the first wild cat to be successfully used in a domestic-wild hybrid breeding program in recent years, giving rise to the beautiful and mild-mannered Bengal breed.