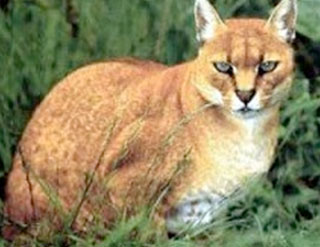 Distribution: African golden cats are found across the African Equatorial belt.  The prefer the rain forest regions, but also range into secondary forest regions and have been known to adapt well to logged areas with dense undergrowth.

Behavior: There has been very little research done in the wild with African golden cats.  It is known to be mainly nocturnal, resting in trees during the day while doing some hunting during the diurnal period. A study of 60 scats in Zaire found a composition of 51% small rodent species weighing less than 300 grams and 20% remains from the duiker, a small antelope weighing about 20 pounds.  African golden cats have also been known to scavenge eagle kills and to prey on injured primates that have fallen from the canopy.  Birds also are preyed upon, but the small rodents make up the bulk of the diet.

Reproduction: There isn’t much information on the breeding cycle of African golden cats.  Their gestation is known to be 73 days with a litter size of 1-2.  Surprisingly, captive born kittens were known to open their eyes at one week of age, where most cats don’t do this until two weeks.  They seem to be very fast developers in other ways as well.  At two weeks of age, they are able to walk well and by three weeks, they are able to jump onto low structures.  They begin to eat solid food at six weeks of age.  They become sexually mature at 18 months.  The longevity record is 12 years.

Status: The African golden cat’s status in the wild is not entirely known due to insufficient study.  They appear to be doing well in the Congo region where large expanses of pristine rain forest exist.  They are listed on Appendix II of CITIES.
At the current time, there are no African golden cats known to be in captivity.  The species has been kept in the past, with a limited amount of breeding done, but those bloodlines have since died out.
The biggest problem facing the African golden cat in the wild, as with most feline species, is deforestation and the loss of habitat.  There is little hunting pressure because the African golden cat is taboo to many local tribes, though there are a few that use the fur in ceremonial dress.