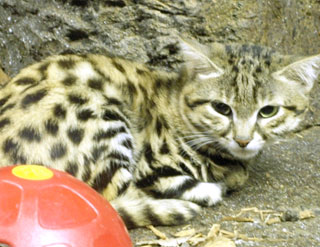 The black-footed cat is one of the world’s smallest wild feline species.  They weigh from 2 to 4 pounds.  The body length is approximately 19-24 inches and the shoulder height is around 9 inches.  The coat is tan to reddish brown, strikingly covered with dark spots, and the legs have wide dark stripes.  As the name suggests, the bottom of the feet are entirely black.  The medium length tail is ringed with black stripes and ends with a black tip.  There are two recognized sub-species.
Black footed cats prey mainly on small mammals and birds, but also take insects and reptiles, in the arid grasslands of South Africa, Botswana, Namibia, and Southern Angola.  Well hidden by the grass, they stalk their prey to close range, catching it with a short pounce.  For their size, they are amazing hunters, being able to catch hares and hyrax that weigh as much or more than they do.  They are mainly nocturnal and have been radio tracked to go 5 miles in a night in search of prey.  Black footed cats differ from most felids in that they can go long period of time without drinking water from standing bodies of water.  They gain most of the water they need from the prey they capture and by licking dew on the long grass.
Black footed cats can breed throughout the year, but most births occur in November and December.  The female is in heat for one or two days.  After a gestation of 63 days, 1-3 (usually 2) kittens are born in burrows abandoned by other animals.  While the kittens develop motor skills quickly, they reach sexual maturity around 1 year of age and can live up to 13 years.
Black footed cats have always been considered rare in the wild and are protected in their native habitats.  CITES list them on Appendix I and they are considered endangered by the US Endangered Species Act.
The black footed cat has never been numerous in captivity.  They were first bred in North America by Roland Lindemann at the Catskill Game Farm in 1960, though stable captive populations have never existed.  There is both an international and North American regional studbook and the AZA does have a Species Survival Plan (SSP) in effect.  There are about 19 in North America.  Worldwide, there is in the neighborhood of 40 in captivity.
Black footed cats are a delicate species and require much specialized care, not all of which has been figured out yet.  Most black footed cats die of kidney failure.  Some feel this is diet related and work is ongoing to determine the cause.  They also develop respiratory diseases when subjected to high humidity, since the come from arid regions of Africa.  They cannot tolerate cold weather and must be kept in a heated building once temperatures drop below 40.  They, along with the Pallas cat, are very susceptible to toxoplasmosis.
In the wild, black footed cats seem to be holding their own, though there is some pressure by local farmers who put out traps and poison for other predators such as jackals and wildcats.  No hunting is allowed in any of their range states.
For more information on black footed cats, visit  Wild-Cat.Org