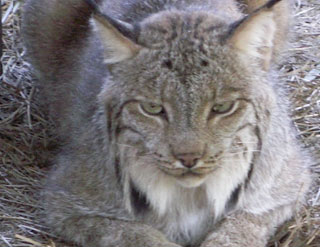 Description: Canadian lynx are short-tailed, long-legged felines. Similar in appearance to bobcats, lynx may appear taller because of their long legs. The weight of lynx is similar to a bobcat. Canadian lynx have thick fur and large feet along with ear tufts and a solid black-tipped tail.
Canadian lynx are tawny gray, sometimes with faint spots on their inner legs. Their gray-brown faces and light gray ear tufts are edged with black. The cats’ large eyes and ears give them excellent sight and hearing.
Canadian lynx have retractable claws for capturing prey, fighting and climbing. In winter, their large feet act like snowshoes, enabling the cats to walk easily on the surface of deep snow. The dense, coarse hair growing on their paws in winter, increases the snowshoe effect and helps keep their feet warm.

Habits: Canadian lynx are solitary, nocturnal animals, avoiding people. They are seldom seen and little is known about their everyday habits. Lynx can live within close proximity to humans, but human actions often result in lynx deaths. The cats are quite susceptible to hunting, trapping and being hit by cars.

Diet: Snowshoe hares are lynx’s primary food. Lynx also eat red squirrel, other small mammals and some birds, including grouse. Sometimes they consume larger animals which have died from other causes. The lynx’s summer diet is more varied than the winter diet.
Lynx are not fast runners. The cats rely more on stealth than speed for capturing prey; they will ambush prey from a concealed spot beside a well used animal trail. Biologists estimate for every animal a lynx captures, it misses ten. On average, a lynx kills every other night, eating 150-200 hares a year.

Breeding: Lynx are able to breed when one year old and if there is a good supply of hares. Often they do not breed until their second year.
Lynx maintain territories which may overlap, but they are solitary animals and avoid contact. They seek company only in order to mate. In the Upper Great Lakes region, male lynx’s territories range in size from 56-94 square miles and females’ from 20-54 square miles. Thus, there can be several females within a male’s territory and he may mate with more than one.
Once they have mated in late January or February, the male and female go their separate ways. The male takes no part in rearing young. About 60-65 days after mating, the female gives birth to 1-4 kits in a den she has selected in a hollow tree, log or brush pile. The kits are blind until 8-10 days old. Their fur is spotted, but the spots disappear when they shed their natal coat later in the spring. The female travels with her young until mid- winter, then drives them away as the next denning season approaches.
Lynx populations rise and fall in response to the periodic “boom and bust” population cycles of snowshoe hares. When hares are abundant, more lynx survive to reproduce and their numbers increase. When hare populations crash, about every 10 years, many lynx die of starvation. Although lynx continue to breed during crash years, females have difficulty supporting both themselves and their young on a reduced food supply; few kits survive. Adults may migrate to other regions in search of food. During these years, lynx have been known to move from Canada into Wisconsin via Minnesota.

Distribution: The distribution of the Canadian lynx closely follows the  distribution of its main food, the snowshoe hare, which inhabits boreal forests. Thus, lynx formerly lived in most forested areas of north-central and northeastern North America, and extended south along the Rocky Mountains to central Colorado. Human actions, mainly overtrapping, have reduced lynx populations throughout much of the species’ former range.
Breeding populations of lynx presently exist in Canada, Alaska, Montana and Idaho, and perhaps in Washington, Minnesota, Vermont, New Hampshire and Maine. It is unknown whether lynx are breeding in Wisconsin. Most lynx in the state are thought to be migrants from Canada.