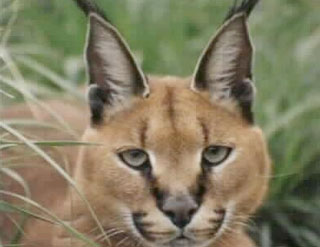 Physical Characteristics: Caracals are flat-headed and brown to red in color, with tasseled black ears.

Longevity: 17 years
Characteristics: While the Cheetah is the fastest cat on earth, the Caracal is undoubtedly the quickest. They are one of the more intelligent felid species, yet affectionate and very trainable. The young Caracals are the least troublesome of all the species we’ve raised indoors. They don’t seem to be as destructive when indoors and when faced with a no-no, they usually obey. Some people are put off /discouraged by their hissiness. Hissing is just their means of communication. While there are instances of Caracal lap cats, they can be a little high strung which means they need lots of stimulation/enrichment.
Caracals are a little more flexible in their diets. They have been recorded eating grass, vegetables and fruits in the wild.
Some Caracals are hair pullers. Some pluck themselves almost naked and do the same to their cagemate. Enrichment, dermatological tests, blood tests, etc. have not lead to an answer. This behaivor seems to be more seasonal which would point to allergies. There are no easy answers.

Natural History: The name Caracal comes from the Turkish word karakal, which means black ear. They are essentially creatures of wide-open country, but their range also covers scattered woodlands and thorn scrub. In India, where Caracals once sat at the feet of princes, only scant numbers remain.
Like Cheetahs, Caracals were once trained by Indian and Arabic nobility as hunting animals, used to chase down small antelope, hares and birds. The owners of the cats would sometimes wager on which of their cats would be the more successful hunter. The winner was the cat that knocked down the most birds during one attack. Totals sometimes numbered a dozen birds per cat!
Long before this, Caracals appeared to have held some religious significance for the ancient Egyptians. Caracals were found in wall paintings, their bodies embalmed, and sculptures of Caracals (and other felines) guarded tombs (Kingdon 1977).

Prey: Caracals feed on a variety of rodents, lizards and ground birds to small antelope. Caracals regularly kill even larger animals of moderate size such as reedbuck and blackbuck. In India, both the Caracal & Blackbuck are rare.
In the Middle East, Caracals often prey on wild goats and sheep which is in direct competition with leopards. They sometimes take Ostriches while nesting and have been known to take Tawny & Martial Eagles while on the ground. Few predators are so adept at catching Hyraxes. Hyrax is a rabbit sized creature of Africa and the Middle East that can scramble about trees and pop in and out of rock piles with elfin nimbleness.

Reproduction: Caracals are polyestrus, meaning they are not seasonal and can reproduce year round. Caracals reach sexual maturity in less than 2 years. First litters have been recorded at 1  year (18 months) of age. Their cyclicity lasts from 3-5 days and seems to peak in Feb., March and August. Gestation is 69-79 days. Litter sizes vary from 1-6 with an average of 2-3.