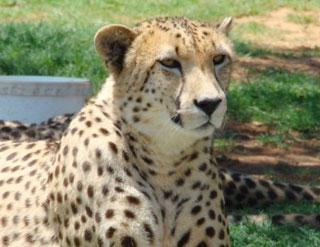 Appearance: The Cheetah’s coat is tan in color with black spots, white under belly. Long teardrop shaped lines on each side of the nose, from the corner of its eyes to its mouth. The tail is spotted, and then forms into four to six dark rings at the end of the tail. The tail ends in a bushy white tuft.
The world’s fastest land animal is endangered:  In 1900 there were 100,000 cheetahs living across Asia and Africa. Now, only a century later, less than 15,000 cheetahs remain in 26 African countries and less than 100 in Iran, the last of the Asian cheetahs.  Today, cheetah populations in over half of the countries where cheetahs are found may be too small to be viable.
It took 4,000,000 years for the cheetah to evolve into the unique and beautiful animal it is today. It has taken less than a hundred years for man to place it on the endangered species list.
As human populations grew, the amount of land devoted to livestock farming steadily increased. Livestock filled the land where cheetahs roamed, and natural prey became scarce. Although game reserves protected them, cheetahs could not compete against the large predators that live in the reserves.
A major threat to cheetah’s survival is its tendency to fare less well in protected areas and nature reserves than other predators. The reason for this is physique. Sprinting up to 70mph / 110km per hour may make cheetahs skilled hunters, but the price they pay for such high speed is a lithe, slight body that puts them at a disadvantage with other large predators.  The sheer effort of the chase can exhaust them; they often need to rest for up to 20 minutes after a kill, and in this time they risk having their prey stolen. With their lighter frame, designed for speed, they cannot defend their kill from lions, leopards and hyena.
Cheetah cubs also often get killed, being vulnerable to lions, hyena and other predators when the mother leaves them to go hunting – and she may be away for up to 48 hours. Although the smoky-gray cubs have long hair, called a mantle, running along their backs to serve as camouflage in the dried grass, many still get killed. In Tanzania’s Serengeti National Park, 90% of all cubs do not reach three months of age.
The world’s fastest feline, the Cheetah is the most unique and fascinating feline of the cat family.  The Cheetah can reach speeds of 70 mph.
Cheetah with its longer legs, lean body and outstretched stance has been nicked as the greyhound of the feline world.  The world’s fastest feline is sleek, long-legged  and beautifully spotted.
Male cheetahs are slightly larger than females and have a slightly bigger head, but it is difficult to tell males and females apart by appearance alone

Reproduction and Offspring: Females are sexually mature at 20 to 24 months. Gestation period of 13-14 weeks, female gives birth to 2-4 cubs, (been noted, some have given birth up to 6 cubs). Cubs weigh between 9 to 15 ounces when born.

Hunting: Primarily diurnal hunter. Hunts by vision rather than by scent.

Social System and Communication: Live singly or in small groups. Communication through vocalizations such as purrs, bleats, barks, growls, hisses, and a high pitched chirping sound.

Principal Threats:  As a species, the cheetah is genetically impoverished.  A genetic bottleneck occurred 12000 years ago as a result of a climatic change during the Great Ice Age, and once the population declined the cheetah became inbred. This, plus the rapid decline in cheetah numbers during the last hundred years, has resulted in a smaller and less diverse gene pool.

Human infringement:  Decline in prey, loss of habitat, poaching, and indiscriminate trapping and shooting as a livestock predator threaten the survival of the cheetah throughout its range.