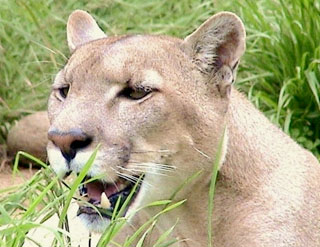 The largest of the lesser cats, the puma, often incorrectly called a panther (a panther is a leopard), is a large and powerful cat with a graceful and narrow body and exceptionally strong legs. It is the champion jumper among cats, able to execute a 30 ft. standing broad jump or an 18 ft. jump straight up the face of a cliff. Its head is small, with small rounded ears. Its has a distinctive call midway between a cough and a snarl. Despite its size, it is a lesser cat and cannot roar. Its coat is a uniform tawny color with lighter under- parts and white on the chin and throat. It sports a white moustache.
The puma was until recently found in all parts of North and South America except the arctic, but is rapidly vanishing from large portions of the U.S. and Canada. It is strongly territorial, claiming an exceptionally wide range, and is solitary even by cat standards, avoiding its own kind except to mate. It hunts by day, primarily from the ground but occasionally from high rocks, low cliffs, or trees, and seeks deer, sheep, goats, peccary, capybara and other similarly-sized game. It will occasionally stalk livestock when other prey is scarce. It avoids humans and their settlements and farms when establishing its territory, but is not shy about contact when a human moves into an already established territory. It is intensely curious about everything in its range, and has been known to enter houses on occasion, even while occupied. In one recorded incident in Arizona, a puma entered a house and stole the roast from the dinner table while the couple was sitting there. They (probably wisely) opted not to move nor to challenge its right to do so.
An exceptionally gentle cat for one so large, the puma is easily tamed, especially when taken as a cub, and does well in captivity.