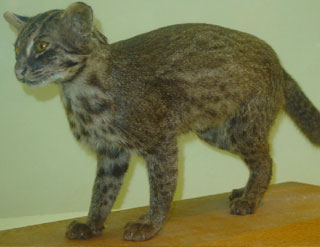 The Iriomote cat is the one of the world’s rarest and most critically endangered species.  It is a small cat, weighing 7-9 pounds and with a body length of just under 2 feet.  The legs and tail (about 7 inches) are short in comparison to the body, giving it a low-slung appearance.  The background color is a dusky brown with horizontal rows of spots that often form into indistinct stripes around the neck and legs.
There are no sub-species of the Iriomote cat, since they only live on Iriomote Island, the southern most island in the Ryuku chain of Japan.  Iriomote Island only has a landmass of 116 square miles.  The species was first described to science in 1967 and there has been much debate if this was a true species or just a sub-species of the leopard cat, the Asian golden cat, fishing cat, or flat-headed cat because of shared characteristics with all of these species.
Two teams of Japanese molecular scientists conducted DNA investigations in the 1990’s and concluded that the Iriomote cat was most closely related to the leopard cat and that the genetic separation occurred less than 200,000 years ago, which coincides with the separation of the Ryuku Islands from the mainland.  Both teams of scientists also concluded that the Iriomote cat has evolved to have enough unique characteristics to qualify it as a separate species of the same family (Prionailurus) as leopard cats.
The Iriomote cat inhabits the low altitudes of the coastal areas on Iriomote, which is also the main area of human population (about 1500 humans in 1990), rather than the more mountainous interior regions.  Here, they prey upon rats, bats, birds, reptiles, and insects.  Information gathered from scat has also shown that they will also take crabs and fish, and they are known to swim very well.  Mainly nocturnal, they hunt mainly on the ground, but will spend some time in the trees.
The breeding season of the Iriomote cat generally takes place once annually in the northern part of their range in February- March, but may occur at any time of the year in the more tropical southern part.  The gestation period is 60-70 days after which a litter of 1-2 kittens has been recorded, although an extreme of 8 was once found.  Maturity is reached in as little as 8 months, and the life span can expect to be about 8-10 years.
The estimated current population in the wild is considered to be less than 100, but has been holding stable since information gathering began in 1982.  Hybridization with feral domestic cats has greatly endangered this species.  In addition, the small range and increasing human population has caused this species to be placed on the CITES Appendix II and listed on the Endangered list by the Us Endangered Species Act.  The Japanese government is attempting to set up reserves and studies to insure the continued survival of the species.  Iriomote cats are fully protected, but increasing human pressure and the hybridization with the associated domestic cats does not provide a bright future to this species with such a small and limited range.
At this time, there are no known Iriomote cats in captivity, and they have seldom been kept, making them one of the least known cats as far as captive care.