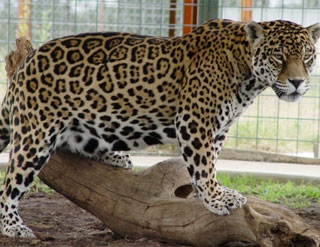 The jaguar, often incorrectly called a panther (a panther is a leopard), is a massive and powerfully built cat, with a deep-chested body and a large head. Its coat is yellowish-brown with dark brown spots in center-spotted rosettes. Some individuals are very dark brown, almost black, effectively masking their spots.
The jaguar may be found near water in savannahs and forests in all parts of North and South America south of the United States. The last native jaguar in the U.S. died in the early 1960’s. It hunts by twilight, from the ground, and seeks peccary, capybara, coypu, otter and fish. It is an excellent swimmer.