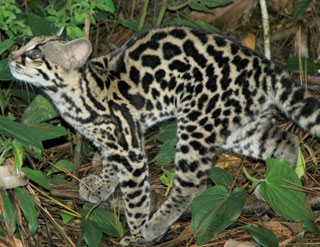 Scientific Name: Leopardus wiedii
The Margay is a neotropical felid whose ecology and behavior are poorly known. Even though the Margay is listed on the Brazilian threatened species list, data available is solely found in anecdotal reports.
This species was initially named Felis wiedii by Schinz in 1821 with one specimen collected in Morro de Arar, Mucur, Bahia, Brazil (De Oliveira, 1998). Its name was given in honor of the Prince Maximiliem de Wied, who discovered this “long-tailed tiger-cat” in an expedition in Brazil (Downey, 1994).
The Leopardus genus was given to the margay by Gray (1842). It now gathers three species (i.e. Lepardus pardalis (the Ocelot), L. wiedii (the Margay), and L. tigrinus (the Oncilla) of the six Brazilian small to medium-sized wild cat species.

Distribution: Originally, the Margay was widely distributed from the United States (one specimen reported in 1842 at Eagle Pass, TX; Mowney, 1994) to southern Brazil. Today, the margay occurs in tropical and subtropical regions. Precisely, the original distribution of margays ranged from the Tehuantepec estuary, through Chiapas and the Yucatan peninsula in Mexico, Central America, Colombia, Venezuela, Guyana, Peru, Ecuador, Bolivia, to southern South America, in Brazil, northern Uruguay, north-eastern Argentina and Paraguay. Margays occur from sea level and up to 3200 m (Costa Rica, A. L. Gardner, 1967, reported by IUCN).

Behavior: This species is known to be solitary and arboreal. It has nocturnal habits, being active from dusk to dawn.

Diet: Margays diet includes terrestrial preys such as rodents, reptiles and arboreal species such as squirrels, marsupials, small birds, hedgehogs, small-sized primates, and sloths. There are few records for margays home-range, varying from 10 km2 (Konecny, 1989) up to 43.1 km2 (Crawshaw, 1995). It is a small-sized, spotted felid (4-9 lbs.). Its ears and eyes are really big and it has a long tail, reaching sometimes 45% of its body length (37 in.). Margays have white bellies with lengthened black spots. Spot patterns and nape hairs allow distinguishing this species from the Oncilla. The margay has impressive ankle flexibility, allowing it to climb and hang from trees.

Reproduction: Oestrus duration varies between 4 and 10 days, females are in heat every 32 to 36 days, and gestation is of 76-84 days, generally giving 1 to 3 cubs. Sexual maturity is reached after 24 months. It has been demonstrated that they do not show any particular seasonal reproductive pattern, which implies they can breed year-round and every year. Females have oestrogen production peaks every 26 days lasting from three to five days.

Status: The margay is listed vulnerable, Appendix I (CITES).