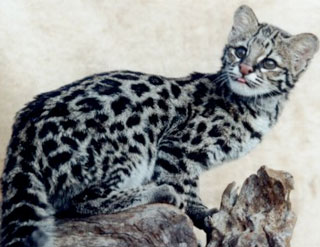 Distribution: The Leopardus tigrinus also are well known as oncillas, tiger cat, little spotted cat, tigrillo and gato-do-mato-pequeno (portuguese). This feline species is widely distributed in South America and Central America, in Argentina, Brazil, Colombia, Costa Rica, Ecuador, French Guiana, Guyana, Nicaragua, Panama, Paraguay and Peru. They are listed in Appendix I of CITES (Convention on International Trade in Endangered Species) which restricts trade, sale of its pelts, hunt and capturing the cat for the pet trade.
In Brazil they have been found in subtropical forest highlands, early secondary forest but also in plantation fields, deforested areas and eucalyptus monoculture. The Tigrinus have preference for the montane cloud forest. These magnificent little felines are very agile, athletic and alert to their surroundings and they eat a great variety of small prey, including birds, insects, reptiles and rodents. They have a nocturnal and solitary routine, except for seasonal mating when the male approaches the female.

Description: Tigrinus are one of the smallest wild cats found in Central America and South America, shown a silhouette and footprint resembling a lot a domestic cat. They weight as little as 4.9 lbs (2.2 kg), and usually do not exceed 6 lb (2.8 kg) with males slightly larger than females.  It is observed that adult males can be very aggressive towards females. Their coat have background color light brown to rich ochre, yellowish or grayish, with dark brown or black spots, beautiful rosettes and blotches. The undersides are very light and sometimes are white, with black spots. The limbs can be spotted and the tail is long, thick, with spots developing into black rings. They have fragile built, with slight bones, small narrow head, expressive golden eyes, large rounded ears and the backs of the ears are black with a white spot. The fur is short, thick and firm, lies close to the skin. Some melanistic Tigrinus may be occasionally found, especially from southeast Brazil.

Reproduction: Captive breeding has been very problematic for Tigrinus, due the insufficient knowledge about this specie. They are very shy, reserved but they can be very aggressive and much is unknown about their behavior, habitat requirements or ecology in the wild, as no wild studies have ever been done.  It is known the males are usually fertile and sexually mature after 18 months old, but females do not usually give birth to their first litter until they are 24 months old. The mating season for the Tigrinus is in the early spring and summer. It can have one or two litter per year, and 1 to 2 kittens in a litter. At birth the kittens can weigh 50 / 80 grams and are very, very tiny. After mating, the males take no part in the care of the kittens. The females are pregnant for 70 to 78 days. The kittens open their eyes at 10 days and start eating solid food at 45 days. The kittens become independent after 4 months old. Longevity is average 11 years in natural habitat, but they have lived 16 to 20 years of age in captivity.

Threats: Deforestation is the biggest threat to Tigrinus and the greatest predator of these cats is man. Through the hunt and traps, the man often killed these wonderful felines for its fur to make fur coats.  Also they are captured to be sold as pets.