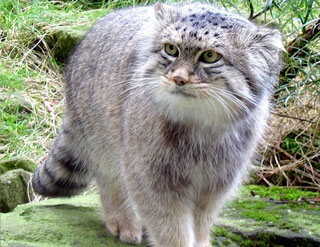 Description: The Pallas’ cat or manul, is a small cat species, ( 3- 5 kg adult weight) native to central Asia, facing growing threats to its survival in the wild.

Status: The species is listed on Appendix II of the Convention on the International Trade of Endangered Species (CITES) and as near-threatened on both the global Red List and the Mongolian Red List of the International Union for Conservation of Nature (IUCN).

Threats: Mongolia has among the lowest human population densities of any country in the world, with about three million people inhabiting a country that is twice the size of Texas in geographic area.  Of these three million people, 40% reside in the capital city, Ulaanbataar, while another 40% still eke out their existence as nomadic pastoralists in the countryside, raising 35 million sheep, goats and cattle in a region virtually without fences or private land ownership.  Illegal wildlife hunting and trade, primarily to supply the growing demand for meat and fur in China, has become rampant.
The long-term conservation of wild Pallas’ cats will depend on increasing local awareness and involvement, controlling poaching and illegal trade, and promoting the development of the scientific infrastructure in Mongolia.

Reproduction: In captivity, Pallas’ cats are highly seasonal, with females only breeding during the winter months and males only producing meaningful numbers of spermatozoa for five months of the year, bracketing the female’s breeding season.

Status in Captivity: The North American Species Survival Plan population of Pallas cats is housed in just 17 institutions.  Cincinnati Zoo houses over a dozen of these cats. Lack of interest in exhibiting this slow moving, longhaired gray cat is frustrating SSP managers.

Health Issues: The kittens of this species experience a high mortality rate from toxosplasmosis, which is a parasitic organism that this species seems to have no natural exposure to in the wild, and therefore no acquired immunity to.
Studies of wild Pallas Cats in Mongolia, as well as feral and domestic cats, and rats, all potential carriers of this organism, has finally provided some answers to this mystery.  It seems that the eco-system the Pallas Cat has adapted to doesn’t carry a toxoplasmosis threat.  This species evloved in a pristine, but harsh environment.  It has not had to evolve along side this organism, and so while adult Pallas’ Cats captured and brought into zoo institutions and exposed to it manage to mount enough of an immune response to survive, they become carriers, and their kittens, having naturally immature immune systems are especially susceptible and frequently die when exposed to this organism.  Pallas’ Cats brought into captivity will never be candidates for restocking in the wild, as these cats would shed this organism into the pristine environment and spell ecological disaster for the native population.