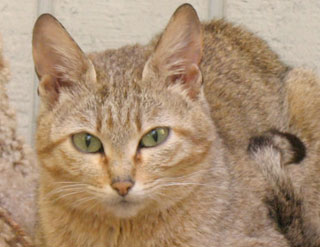 An older species, evolving about 650,000 years ago, the European wildcat is in the direct ancestral line of the domestic cat (our cats) and is the parent species for several related small cats, most notably felis lybica, which it strongly resembles. It is about one-third larger than a feral domestic cat and resembles it in both build and coat. It is often mistaken for a large tabby with disastrous results, as it is not at all friendly (somewhat vicious, in fact). Its coat is long and thick, to protect it from harsh European winters, and is colored and marked identically to your basic brown stripped-tabby alleycat.
The European wildcat may be found in all parts of Europe and Asia west of the Urals and the Caspian except the arctic. It is not afraid of humans and will live on the outskirts of cities scavenging in garbage bins (much as do raccoons and coyotes in the U.S.). It is very prolific and a long way from being endangered, even though its territory is diminishing as more and more of Europe is converted to city and suburbs. It hunts by twilight, from the ground, and seeks rats, squirrels, birds, small deer, domestic cats, small dogs, and poultry. It is usually considered vermin by farmers and villagers.

The primary ancestor of the domestic cat (and our cats), whom it resembles, the average African wildcat has a more sturdy build and is slightly larger than the average domestic cat though not as large as some of the bred-for-size subspecies. Its coat is light brown to light yellowish-brown with stripped-tabby markings. Cats with darker tabby markings, similar to tabby cats, are found in forested areas, while cats with paler markings are found in grasslands.
The African wildcat may be found throughout Africa and the Middle East, Asia as far east as India, and the islands of Corsica, Sardinia, and Majorca. It is often found around human settlements and farms. It hunts by night, usually on the ground but sometimes from trees and bushes, and seeks rodents, reptiles, birds and insects.
The African wildcat is very easily tamed, especially when taken as a kitten, and many farmers in its range have African wildcats in lieu of domestic cats. 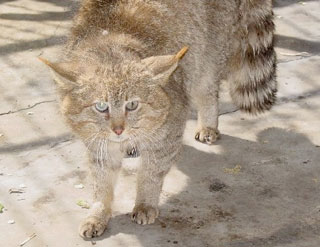 A very rare cat, the Chinese desert cat is a subspecies of wildcat. This well-proportioned cat-sized cat has soles of its feet covered with thick mats of fur to protect it from the hot sands. Its coat is sandy brown with distinctive darker brown spots set in wide-spaced vertical rows. Its undersides are very pale.
The Chinese desert cat may be found in the deserts, steppes, scrub and mountains of Mongolia and China, where it hunts by night, from the ground, and seeks small rodents and reptiles