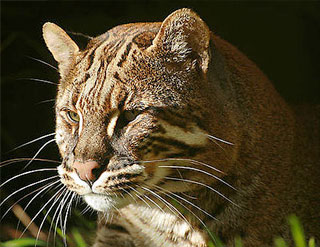 Temminck’s golden cat is a medium-sized, well-proportioned cat with short round ears, about twice the size of a cat. It has a strikingly beautiful appearance, with a deep-golden coat fading to white on its undersides. In some subspecies, there is an absence of spotting, while in others faint brown spotting is evidenced. An occasional individual will be very dark brown, almost black. There is a distinctive grey patch behind each ear, while a white line bordered in black runs from each eye to the top of its head.
Temminck’s golden cat may be found in the forests and rocky areas of Asia from the Himalayas to the Maylay Peninsula, where it hunts by day, from the ground, and seeks game of all types up to the size of small deer.