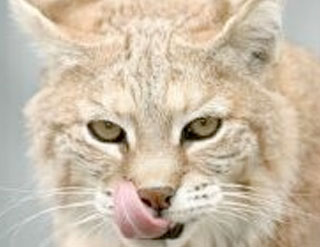 Appearance: Bobcat’s pelage ranges from reddish brown to yellowish or grayish and many also sport a variety of dark brown or black spots or streaks. Bobcats molt twice a year. Their summer coat is generally more rufus colored, the winter coat is grayish, with black tipped guard hairs. The 11 to 14 subspecies listed to date show few realistically distinguishable taxons that have any real biological or managerial significance. Bobcats are generally about twice the size of domestic felines, though more muscular and compact. Males are usually one third larger than females.

Behavior: Bobcats are best described as crepuscular rather than nocturnal. Most activity occurs between three hours before sunset to midnight and again from an hour before sunrise to four hours after.

Bobcat Distribution: Bobcats are native across the United States, being absent only from mid western states due to intensive agriculture and the resulting destruction of suitable habitat cover and prey species.

Habitat: Rock piles or broken rocky ledges, as well as brush piles, hollow trees, and logs are used by bobcats for rest areas and natal dens. Courtship sequences observed by McCord and Bailey (1972) either began or ended in a ledge area.  Ledges seem to function as gathering places for the otherwise solitary cats and are an important terrain feature in bobcat habitat in the northern portion of their range. In Massachusetts, one of the four most densely populated states in the nation, the historic range of the bobcat has always been the western two-thirds of the state, which provides habitat where ledges are fairly common.  In the areas where there are no ledges, bobcats are scarce or absent. In southern states habitat utilization studies found that bottomland hardwood forests were the referred bobcat habitat, followed in importance by old fields and upland forests.  Pine plantations older than five years and mature pine forests were minimally utilized, presumably due to a lack of prey species.

Breeding: Bobcats generally breed between January and July, with peak activity noted in March and April. The mean ovulation date was set at March 15th.   Bobcats are polyestrous and probably recycle in 44 days.
In Arkansas, Sealander and Fritts (1978) believed that bobcats were capable of breeding all year. I know of a native Arkansas bobcat kitten that had to be no more than 6 weeks old when captured in the middle of December. In our captive bobcat collection most of our females begin cycling in the month of March and are finished for the year by June.
Adult females usually average 5 to 6 mature follicles for both ovaries. (Erickson 1955a) It is believed that bobcats may cycle up to three times per season if they do not conceive. We have found this to hold true for our two non-breeding females in our captive population. There is a difference of opinion as to whether bobcats are induced or spontaneous ovulators.
Male bobcats show little evidence of spermatogenesis until the second year. Crowe (1975a) found that the mean testis volume of male bobcats in July to September to be significantly less than it was from January to June. Few spermatozoa were found in the tubules or epididymides of mature males during the summer months of July and August.  Sperm production seems to start in September and October, with mature males fecund until sometime in the summer months.  However, at no time was a total absence of spermatozoa observed.
In mating behavior McCord (1974) recorded an elaborate sequence of pursuit or running encounters, bumping and ambushes that occurred before and after copulation. The pair bond appears continues beyond what would be required just for breeding. Mating pairs have been observed to hunt cooperatively and feed on deer carcass.
Lembeck (1978) reported that four of seven males increased their home ranges during breeding season.  He reported observations that males and females were scarred about the face and ears during breeding season. Zezulak (1981) could not rule out extreme aggression being possible during breeding season.  He observed a male bobcat eating another that had died of bites to the throat region.