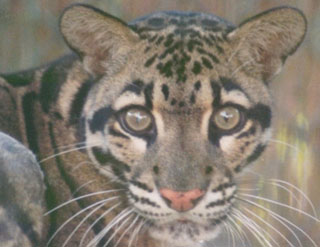 The clouded leopard is a slim, well proportioned, medium-sized cat. Its coat varies from pale brown to rich brown with large irregular blotches, said by the Chinese to resemble the shape of mint leaves (hence the name mint leopard in China). Its head is banded, with small, round, black ears with a central grey spot. Its underparts are pale or white, and its tail is ringed in black.
The clouded leopard may be found in the dense forest and scrub of southern and southeastern Asia, where it hunts by night or day, from trees, dropping silently down onto its prey, and seeks medium-sized game of all types. Completely at home in the trees, this cat is one of the best climbers — the margay is arguably better, but is nowhere near the same size — and can run up and down a tree like a huge squirrel.
Some zoologists classify the clouded leopard as a lesser cat, sticking with the genus neofelis, as its hyoid bones are intermediate between the two extremes: it can only roar softly. Most zoologists, however, place it in the genus panthera, and classify it as a greater cat.