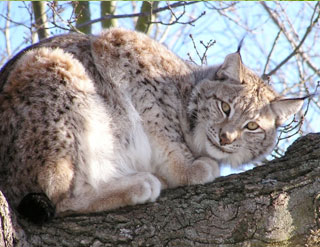 The lynx inhabiting Europe and Asia have recently all been reclassified as being subspecies of what is now called the Eurasian lynx.  Formerly, each subspecies was classified as different species of the genus Lynx.  These include the Siberian lynx (L. l. wrangelli), the Northern European lynx (L. l. lynx), Southern European lynx (L. l. dinniki), the Baikal or Irkutsk lynx (L. l. kozlowi) and the Mongolian lynx (L.l. isabellina).  Two populations are sometimes given species status, but are most likely geographical sub-populations:  L. l. sardiniae found in Italy but resembling L. l. lynx and L. l. stroganovi resembling the L. l. wrangelli.  Males are 50-80 pounds and female are 40-50 pounds.  Heights average around   24inches at the shoulder.
Differentiating between the different species can be difficult.  The differences are sometimes very slight between the species:
Northern European lynx (L. l. lynx) are normally a grey color on the sides and back with a white spotted belly.  They usually do not have any spots or patterns on the backs or sides.  They have a very tall appearance because their bodies are not as heavy as the eastern species.
The Southern European lynx (L. l. dinniki) has the same body build, but have very heavy spotting on the body, rivaling the Spanish lynx.  They also tend to be more reddish in their base coat color.
The Siberian lynx (L. l. wrangelli) is slightly shorter than the western European lynxes, but has a heavier body.  The coat is usually a grey or silver color with much stippling of white hairs mixed in.  Spots are seldom found on Siberian lynx.  They range from western Russia to the Bering Sea.

The Baikal or Irkutsk lynx (L. l. kozlowi) is the tallest and heaviest of the lynx species.  They are found in a limited range located near Lake Baikal (the world’s largest body of fresh water) region of Siberia.  They also are very heavily spotted and the back ground tend to have a lot of red.
The Mongolian lynx (L.l. isabellina) is found in the mountainous regions of Mongolia.  They have the same body type as the Siberian lynx, but they have a very dull grey coat, without the stippling of white found in the Siberian.  Mongolian lynx also do not have spotting.
All Eurasian lynx are long legged with large feet.  These attributes help them to travel in deep snow and remain effective predators in the wintertime.  Their ears are tipped with long tassels of black hair.  The presence of these long ear tassels has led many people to misidentify caracals as being a member of the Lynx genus, which they are not.  Lynx also have a short, about 8″ tail which is always tipped with a black end.

Eurasian lynx inhabit the forests and woodlands.  They do like areas where rocky outcroppings can be found.  It isn’t known why they are fond of these rocky ledges, but their American cousin, the bobcat, also prefers these areas.  In these forested regions, the lynx will hunt their favorite prey, the deer, usually preying on young animals.  Lynx are capable of killing animals four times their own size.  Rabbits and other large rodents also form a major part of their diet, but they are not so dependant upon them as the Canadian lynx.  The Eurasian lynx usually stalk their prey and overtake them with a quick burst of speed, killing the prey with a swift bite to the neck.  They are also good climbers and can use trees as platform for attacks from above.  They are most active in the morning and evening hours, spending most of the daylight hours and night resting.
Eurasian lynx breed in February and March, giving birth after a 68 day gestation period.  Litter sizes are normally 2 or 3.  Litters larger than 4 have never been reported.  Unlike many cats in captivity, Eurasian lynx only give birth one time a year and do not come into heat again if their litter is lost or removed.  The kittens will stay with their mothers for about 10 months before they take of on their own.  Females become sexually mature at 2 years of age and can produce until they are around 14.  Often times, a male will not mature until he is 3 years of age, but can produce until he is 16 or 17.  Their life span is usually drawing to an end at 17 years, though reports of lynx up to 24 years have been reported.

The captive population status of the different Eurasian lynx varies quite a bit.  Siberian lynx are well represented in both Europe and North America.  Over the last decade, many imports into North America were made, primarily by fur farmers.  The attempt at raising the lynx commercially for their fur turned out to be economically unfeasible and most of this new bloodline found their way into the hands of other breeders.  The Northern European lynx has a large captive population in Europe, while fewer animals exist in North America.  While several imports were made of this sub-species, most have failed to reproduce, or produced few offspring.  Southern European lynx are much fewer in number in captive environments.  Only a handful exists in both Europe and in North America.  Baikal lynx are even rarer in captivity.  Only 6 are known to exist in North America and these are either post reproductive or are not breeding.  Europe has a similar number of the Baikal lynx.  No Mongolian lynx are known to be in captivity at the present time.

Many of the Eurasian lynx found in North America appear to be crosses between the various sub-species as they exhibit characteristics of these different types. It is believed that this is due to past importers bringing in any of the various sub-species and proclaiming them to be Siberian lynx.  Siberian lynx are the most commonly known sub-species and were therefore the easiest to sell.   Since most people are unable to differentiate between the sub-species, this was a common practice.  This type of activity is not confined to lynx.  In the high demand years, importers would take orders for ocelots but would deliver leopard cats, geoffroy’s cats, margays.any spotted cat that they could obtain.  The novice purchaser took the dealer at his word and never knew the difference themselves.

Currently, there is no organized captive breeding management program in existence for Eurasian lynx.  The AZA Felid TAG has recommended that member zoos not breed these cats and should attempt to replace them in their collections with a species that is recommended.
In captivity, Eurasian lynx are easily kept.  Though a large cat, they are able to be contained by fencing that is at least 14 gauge welded wire.  The enjoy resting spots that are high off of the ground.   Even though they are a species that occurs in the far north, Eurasian lynx do tolerate warm weather quite well, unlike the Canadian lynx.  In more northern areas, they love the cold weather and particularly enjoy playing in snow.  An adult lynx will eat about 3 pounds of meat per day.  In temperament, the Eurasian lynx are very similar to that of a bobcat.  When hand raised, they remain quite tame throughout their life, but do tend to be quite a handful when kept inside a home because of their size and sometimes rambunctious play.

The Eurasian lynx have a good population in the wild.  In Russia, their range has expanded since the 1930’s to include areas where they were once extirpated due to hunting pressure.  In China, their mountainous habitat has retained a stable population, though they have become rare in some locals.  In central and southern Europe, lynx became increasingly rare until the 1900’s.  Since then, they have generally recovered in areas of good habitat.  Re-introductions in Germany, Switzerland and Austria were very successful.  These efforts were the most extensive and wide spread re-introductions ever attempted with a felid species.  Northern Europe (Finland, Norway, Sweden, north-eastern Poland and the European region of the former USSR) has a strong and stable population.  In central Europe, a relatively large but isolated population is found in the Carpathian Mountains (Slovakia, Poland, Romania, Ukraine). Small populations are found in the French Pyrenees and Vosges mountains; the Jura mountains (France, Switzerland); the Alps (Austria, France, Italy, Switzerland); the Balkans (Albania, Croatia and Slovenia); and the Bohemian forest (Czech Republic).  Population densities have been identified from 1 up to 19 cats per 36 square miles (100 square kilometers).  Home ranges for males average 95 square miles and females average 60 square miles.  The home ranges for males will overlap, but the females generally will not tolerate another female in her home area.

Eurasian lynx are listed on Appendix II of Cities.  However, their good population does allow for hunting and trapping in northern Europe and Russia.  The largest problem they face is diminishing populations of deer, as they have been found unable to successfully subside on solely small prey during the winter.  Deer are much easier prey because of their vulnerability in deep snow.  As always, habitat destruction is the main culprit in declining populations.  While some domestic livestock depredation does occur, western European countries subsidize losses of approximately $7,000 a year.  These subsidies promote good neighbor policies between farmers and lynx.

The impact of hunting and trapping on the population is difficult to judge, since only harvest level information is available and more pressure is exerted in times of high fur prices.  Russian harvest levels vary from 2,000-5,800 annually.  The high occurred in 1956 and again in 1985-86, when individual pelts could bring as much as $2500.  The dates of these high harvest records indicate that the population has remained relatively strong and stable.  During the high year of 1986, China exported 12,000 pelts, though it is suspected that some of these had been stockpiled and were not all harvested in one year.  In 1993, China established an export quota of 1,000 pelts per year and Russia limited their exports to 2,800 per year.  Current prices for a lynx pelt are approximately $100.