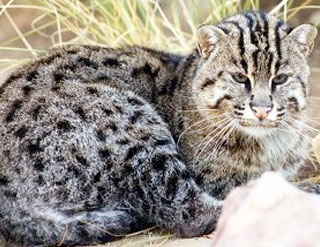 Range:  The Fishing cat is a Southeast Asian cat found from northern India, Sri Lanka, Burma, the Malaysian Peninsula, to Sumatra and Java weighing in at 12-20 pounds.

Description: They have a stocky build, standing 20 inches at the shoulder with a head and body length of about 31 inches.  The tail is only about a foot long.  Males are generally about a quarter larger than the female.  The coloration is a gray base with solid black spots.  There are distinctive dark lines running from the top of the eyes up over the forehead, breaking into more irregular stripes along the spine.

Habitat: The fishing cat is commonly found in areas near water and its primary prey is fish.  They will also take rodents, deer fawns, young wild pigs, and domestic animals.  Birds are seldom taken, but there have been reports of fishing cats swimming up, fully submerged, to waterfowl and attacking them from beneath, grabbing the bird�s legs.  They will also sometimes scavenge from tiger kills or from livestock carcasses.

Diet: Fishing cats prefer to hunt wetlands rather than moving watercourses.  They are excellent swimmers and will dive in after fish.  They also will lie in wait and attempt to scoop fish out of the water from the water�s edge with their paws.  Hunting has been observed at all times of the day.

Reproduction: Fishing cats can breed throughout the year, but births peak in April and October.  The gestation period is 63 days and a litter of 1-4 kittens results.  They mature at 2 years of age and can live to be 12 years old.

Status: In the wild, fishing cats tend to be locally concentrated around areas of water and are not common in all areas of their range.  They are listed on Appendix II of CITIES and are protected nationally throughout most of their range.

Captive Status: The outlook in captivity is fairly bright.  While there is not a huge captive population, there is a fairly good genetic base to work with and breeding is not that difficult to achieve.  There is an SSP that has begun to oversee the maintenance of keeping the genetic viability for fishing cats.
The main problem facing fishing cats in the wild is the destruction of wetlands.  A recent survey found that over 50% of Asian wetlands faced threat of draining, pollution, and human encroachment.