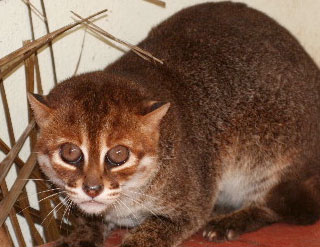 To most observers with an elementary knowledge of zoology, the skillful swimmer and fisher would have been readily classified as a member of the mustelidae family of which otters are so well known. Unbelievable as it may appear, our expert diver, however, is a true felidea.
The Flat-Headed Cat (Felis planiceps) has only very recently come to light as a very fascinating cat. Known to science as early as 1828, the species (like so many other nocturnal felidae) was never really studied in the field. It is only recently, that the diminutive and beautiful creature has reached us alive and in very small numbers.
Their study in captivity, however restricted in scope and possibility, has revealed an otter-like animal of great beauty. The elongated body terminates with a short, stubby tail. The limbs are extremely short and the feet are webbed (a remarkable feature among felines). In color, the rich and velvety fur reminds one very much of some true otters. The “mink look” of the reddish-brown pelt is created by each hair having a white tip, which creates the peculiar silvery tinge of the species.
The size is small — the length of head and body not exceeding 24 inches. The weight is three to six pounds. The head is boldly marked with two narrow, dark stripes running across the cheeks to the under part of the ears.
A very unusual cat, the flat-headed cat is omnivorous, being equally content with prey or vegetation. It is about the size of the domestic cat, but with a very long body, short legs and tail, and a broad, flat head with a ridge formed by the nasal bones and small round ears. Its coat is reddish-brown to dark brown, with a yellowish-brown face and white underparts. The underside of its tail is yellowish-brown.
The flat-headed cat may be found in the forests and scrub of south- eastern Asia, often near human habitation and farms, where it hunts by night, from the ground, and seeks rodents, frogs, other small animals, fruit, sweet potatoes, and other legumes. It often raids garbage cans and gardens, and fills the ecological niche that in other parts of the world is filled by raccoons, weasels, and stoats.