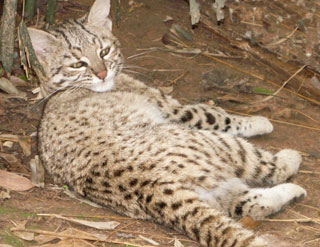 Geoffroy’s cats are one of the smallest wildcats on earth. Average weight ranges from 4 to 8 pounds. There are four contiguous subspecies currently recognized:

Other names for the Geoffroy’s cat are Geoffroy’s ocelot and gato montes (mountain cat). The feline was named after the French naturalist Geoffroy St. Hilaire.

Habitat: The Geoffroy’s cat is a rugged feline. It has survived in some of the most formidable terrains. At 10,000 feet on the Antiplano in Bolivia, a barren windswept plateau of salt flats to the “Green Hell”, a vast central lowland area along the eastern slope of the Andes of northwest Argentina. It can survive and thrive in the hottest temperatures in all South America. The Geoffroy’s cat is the only shorthaired cat that can thrive so far from the equator. From the heat of the “Green Hell” to powerful cold winds and never ending dry prairies with continuous dust storms in the Patagonia area of southern Argentina, a vast, sparse region inhabited by hardy Aboriginal Indians, you guessed it . . . you’ll find the Geoffroy’s cat.

Behavior: If adaptability is the key to survival in this ever-changing environment, this little feline may out survive all other cats in the wild! Reported to be nocturnal, the Geoffroy’s cat will hunt mainly rodents and birds. He will utilize both trees and open land for hunting. Mainly terrestrial, he will use any available cover to hunt, avoiding open spaces, moving from rock or bush when possible.
It has been reported, as a pet, the Geoffroy’s cat will avoid crossing an open room, preferring a serpentine movement from one chair to another, until he reaches the other side of the room.

Appearance: Geoffroy’s cats obey basic rules of wild animal genetics. The large cats are from the southern quarter of Argentina. They have longer coats that are waterproof (like seals), and the undercoat is dense. This coat helps to conserve body heat. The smallest cats are from Paraguay. Here the coat is shorter and is coarse and lies close to the body to help keep the body cooler in the heat near the equator.
The coat color also changes with geography. Coat color ranges from silver-gray through ocher-yellow to brownish-yellow. All cats are covered with back spots of nearly equal size placed at equal distance from one another. Some cats have markings on shoulders and flanks which tend to form rosettes and wavy lines. The head is streaked and spotted. The tail is spotted and ringed with a white spot at the tip.
Like many wild cats, the ears of a Geoffroy’s cat have the white spot behind. The paw pads are usually dark, the nose a brick red and eye color that ranges from clear gold to amber. This species is usually 18 to 27 inches long with an average size of 23 inches. Tail length average is 14 inches. As previously stated, weight ranges from 4 to 8 pounds. Some males may weight up to 12 pounds, and females are about 6 pounds.

Reproduction: Litters consist of usually two to three kittens. The kittens are born with lush undercoats that are fully spotted. Sexual maturity is at about 1 1/2 years. Geoffroy’s cat has been reported to breed easily in captivity. Although disagreement exists in the breeding with domestics, some breeders have reported enough unrelated bloodlines to maintain genetic vigor.

Status: CITES (Convention of Trade of Endangered Species of Flora and Fauna) enacted in 1974; an agreement between nations to regulate trade of endangered species, classified the Geoffroy’s cat as APPENDIX I, which means trade is strictly regulated, but is still allowed.
The Geoffroy’s cat’s greatest threat is from human disturbance of habitat and over harvest for the fur trade. The little cat has few predators in the wild.