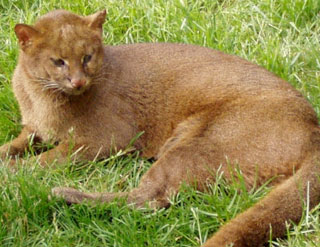 Often mistaken for an otter because of its peculiar shape and appearance, the jaguarundi has a long sinuous body, very short legs, a flattened tail, and a long flattened head with a short nose and very small low-set round ears. Similar to the flat-headed cat but even more extreme in appearance. Its coat comes in two color phases, brownish-grey to black and bright reddish-brown, which readily inter- breed, producing young of both phases in their litter. Both phases shade to white on their undersides.
The jaguarundi may be found in lowland forests, scrub and chaparral of South America and North America south of the southwestern United States, where it hunts by night and by day in the afternoon, from the ground, and seeks mainly birds and the occasional rodent. It fills the same ecological niche as the raccoon, weasel, otter, or stoat, and occasionally has territorial clashes with them.