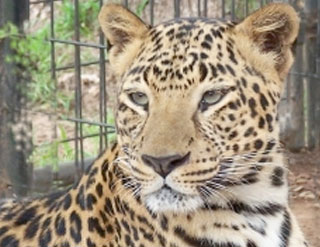 The leopard or panther is a large, graceful cat with a long, lithe build. Its coat is pale brown to yellowish-brown with dark brown spots in rosettes. Some individuals are very dark brown, almost black, effectively masking their spots and producing the famous black panther.
The leopard may be found in all parts of Africa south of the Sahara, Asia east of the Indus and south of Mongolia, and Indonesia, where it hunts by night, by twilight, and by day in late afternoon and early morning, from the ground or from trees, often dropping silently on its prey, and seeks large or small game of almost any type.
African and Asian leopards are maintained by US zoological parks. These leopards are managed without regard to specific subspecies. The educational value of the leopard is effectively reached in exhibits when it is combined with educational programs that teach the public about the global threats to survival this species faces in its native countries.
Captive management of leopards by AZA member zoos concentrate on the Russian, or Amur, leopard subspecies only. This highly endangered feline is managed on a worldwide level due to its very tiny gene pool, necessitating cooperation between zoos of Europe and Russian and the US to maximize the potential for genetic diversity.  Issues however cloud the Amur leopard.  Most captive leopards are not sub-species pure. This is due to one of the founders of this population having been determined to not be an Amur leopard, but another subspecies. Since these genes have been passed through much of the US and European collection, many Amur leopards are actually generic.
The two continents approached this pollution problem in opposite manners. The US chose to dilute its foreign gene pollution by continuing to breed individuals of known genetic pedigrees with the few bloodlines of pure Amur leopards to reach a goal of only 20% mixed genes.
The European management chose to discard any known hybrids from their breeding programs and only breed 100% pure Amur leopards. This greatly reduced the genetic diversity of the captive population and left the European collection vulnerable to inbreeding.