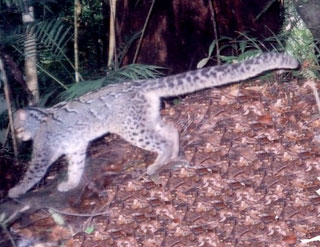 One of the most fascinating feline species in the world, from the point of view of mystery, beauty and rarity is certainly the almost unknown creature commonly called the marbled cat or felis marmorata. Three races of this genus have been defined.
The marbled cat’s range superposes almost exactly that of two other felines: the more common leopard cat (fells bengalensis) and the larger clouded leopard (neofelis nebulosa).
Evidently versatile and highly adaptable, the species ranges from the high and snowy forests of Nepal, Sikkim, and Bhutan where it overlaps the habitat of another prestigious star of the feline family, the unique snow leopard (panthera uncia) down through Burma, Assam, Laos, North and South Viet Nam,  Cambodia, Thailand, all the way south to the hot and humid rain forest of the Malay Peninsula, Sumatra and Borneo.

Size, Physical Characteristics:  The mean body and head measurement is twenty inches. The tail is slightly longer than the head-body measurement by one half to one full inch. The head is relatively small, with very large and beautiful eyes and small rounded ears.
The texture of the fur is extremely soft and rich. The markings, which are somewhat reminiscent of the clouded leopard’s but more blurred, are never similar in size and shape on different specimens. The irregular, large, dark brown or black blotches are edged on one side only with a lighter shade of brown than the general background which varies from a dull olive gray to russet brown according to individual differences. Lower part of front legs and hindquarters are spotted on a lighter background than the rest of the body. The striking feature of this species, however, does not rest with its peculiar markings, no matter how surprising they may appear to be, but in the unforgettable stance of the animal in motion.

The Marbled Cat in Action: The hind legs are extremely long and slender and the back is slightly arched, while the richly furred, very long tail is carefully kept either upturned at the end or curled around, seemingly to avoid at all times any possible damage to this gorgeous appendage. In a reclining position the tail is curled beside the animal or completely wrapped around him. The fact that the feet are large in comparison with an ocelot or domestic cat is probably responsible for the assertion made by some zoologists years ago that the marbled cat is completely arboreal.
The species, for some unexplained reason, seems to be extremely rare anywhere across its enormous native range. According to reports from Asia, it is by far the rarest and most secretive feline in its natural haunts. Almost nothing is known of the marbled cat’s behavior and habits in the wild.