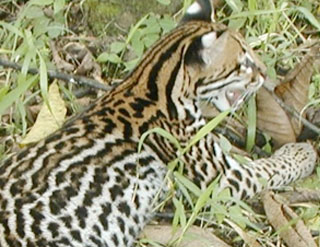 The ocelot is a medium sized cat found from Texas to Northern Argentina. Other common names for this cat include painted leopard, tigrillo, maracaya, and tirica. The word ocelot comes from the Aztec word “tlalocelot” meaning “field tiger”.

Description: Ocelots have beautiful striped and spotted markings. The fur may be anywhere from a pale cream to a reddish gray with open centered spots that run the length of the body like links in a chain. The underside is snow white with tiny black spots and stripes. These markings allow it to blend perfectly with its surroundings. The markings on the ocelots are like fingerprints, no two ocelots are marked the same. Males are generally larger than females weighing between 30-40 pounds while the females generally weigh between 20-30 pounds. Ocelots have 30 teeth in their mouths and incredible bite strength for such a small cat.

Habits: The ocelot occurs in a great variety of habitats ranging from humid tropical rainforest to dry scrubland. They have a home range of 1 to 4 square miles. They require plenty of cover in which to hide and hunt. Their main prey is small rodents, weighing less than 2 pounds, however they are also known to eat lizards, snakes, land crabs, fish (when available), and occasionally small primates. Their diet varies depending upon the season and prey availability. They are mostly nocturnal but will hunt during the day if prey species are more abundant then. Generally they are solitary hunters, however, there are documented cases of cats hunting in pairs, mewing to each other as they close in on their prey.

Reproduction: Ocelots mate once a year producing a litter of kittens after a gestation period of approximately 85 days. The average litter size is 1 to 2 kittens although they have been known on rare occasions to produce up to 4. The kittens are born in well-protected dens in dense thickets, rocky outcroppings, or among roots of a fallen tree. The kittens remain in the den for several weeks. They are born tiny and helpless with their eyes closed. The female ocelot raises the kittens with no help from the male. At around 3 months of age, the kittens begin to accompany their mother on hunting excursions but remain dependant upon her for meals for several more months. They remain with their mother until they are around a year old.

Threats: Although in the 60’s and 70’s, ocelots were hunted relentlessly for their beautiful pelts with one estimate putting the yearly worldwide harvest at 200,000, the biggest threat to their survival today is habitat destruction. In many areas throughout their range, the heavy cover that they require to hide and hunt is being cleared and new roads keep their populations restricted. They are at some risk throughout most of their territory and are listed as Cites Appendix I. This means that for the most part, they are no longer traded commercially, at least not internationally. The importation of ocelot pelts into the US was prohibited in 1972 with the passage of the Endangered Species Act and they are now protected in most of the countries that they inhabit, but they can still be hunted legally in Peru, El Salvador, and Guyana. Illegal hunting still occurs in many of the areas in which they are protected. In Ecuador in the summer of 2005, I encountered 4-5 ocelot pelts in the markets. One of those was in a government supported tourist site. Although they are said to be protected, enforcement is lax. The average price for the life of one of these beautiful animals was a mere 30.00US