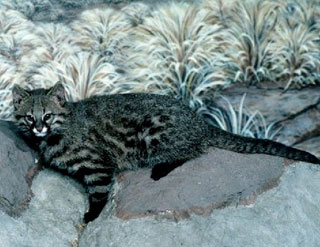 The Pampas Cat ranges along the southwestern grasslands of South America in the countries of Chile, Ecuador, Peru, Brazil, Paraguay, Bolivia, Argentina and Patagonia. They also live in forests and high altitude regions. Seven sub-species are presently recognized.
You can’t write about Pampas Cats without discussing the two types of pampas that provide the main habitat for this feline species. Pampas are flat, fertile plains that cover an area of 300,000 sq. miles or 777,000 square kilometers, from the Atlantic Ocean to the Andes Mountains, found primarily in Argentina and extending into Uruguay. These Pampas habitats provide the small mammals, such as guinea pigs and chinchillas, rodents and birds the Pampas Cat preys upon.
The humid pampas eco-region is a savanna-like grassland mosaic, dominated by bunchgrasses and scattered with shrubs and small trees. Here one can find the rare Pampas Cat, stalking chinchilla in the high grasses. This is one of the richest grazing areas in the world, but it has been severely degraded by domestic livestock and farming. No pristine pampas habitats remain, and there are only a few true remnants of this once-vast “sea of grass.” Today, it is considered one of the most endangered habitats on Earth.
The semi-arid pampas eco-region is also some of the world’s richest grasslands. The land is dominated by tuft grasses, scattered trees and interspersed with mesquite, jarilla, and ephedra shrubs. Many seed eating bird species inhabit this region, such as the Double Collard Seedeater, the great Pampas Finch, the grassland Yellow Finch, and the Long Tailed Reed Finch. It is also home to the rhea as well. The Pampas Cat and Geoffroy’s Cat both share this prey-rich habitat along with the Maned Wolf and the llama-like Guanaco. Like the humid pampas, the semi-arid pampas are also rich grazing areas that have been under intensive human cultivation since the 17th century.
The Pampas Cat face is broad; their ears are pointed. They have an incredible diversity in coat coloration and markings. They can be a silvery gray with reddish bands running over the legs and body. Some are solid red with black bands on their legs, and some are a lighter tannish color with spots on their back and stripes on their legs. They are also known to be melanistic.  They have long hair; up to 2.5 inches (7 cm) in length.  They have a small mane down their back and a bushy tail. When the cat is frightened the mane and tail hairs stand erect making the Pampas Cat look bigger than it actually is.  The Northern subspecies have gray ears with a white spot on the back, farther south the Pampas cats have plain ears. The bars running from the corner of the eyes to the ears is more pronounced in western subspecies.
The breeding period is from April to July. Gestation is 80-85 days, and litter size is 2-3 kittens. They are thought to be nocturnal, but not much is really known about their habits.
Jim Sanderson launched a photo-trapping project and in 2001, he sent Leandro Silveira who is working in Emas National Park in the cerrado of Brazil one antenna, one receiver, and 10 radio collars to be used for radio telemetry studies to learn more about this rare feline. From 1976 – 1979, 78,000 skins were exported for the fur industry. They are still hunted, but in 1980 they gained CITES II protection.
FCF members had the very special opportunity to see this rare feline when we visited the Cincinnati Zoo at Convention 2003. Several melanistic specimens were seen on display and off-display. This is the only zoo in the US to house this species, as is not part of the AZA Felid TAG approved Regional Collection Plan, and this species will not be bred, imported or maintained at AZA zoos in the US in the future.