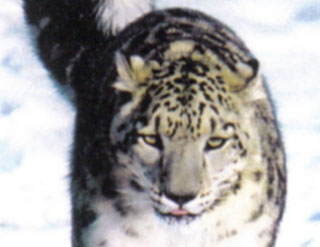 Appearance: The snow leopard’s coat is a soft gray shading to white on the belly. The head and lower limbs are marked with solid black or dark brown spots arranged in rows. The body is covered with medium brown blotches ringed with black or dark brown rosettes. A black streak along the back of the cat; tail is round and heavy with fur; ears are edged with black. The background of the cat’s coat turns darker in the summer. This cat has one of the most valuable pelts and is the prime reason for poaching. It is listed as CITES Appendix I – Endangered.

Vocalizations: They make audible communication though a complex series of grunts, varying in pitch and intensity. When greeting other snow leopards, they make sounds by exhaling their breath causing the upper lip to flutter, making a very distinct sound called “chuffing”.
Even if you can’t hear these chuffing sounds, it is easy to tell visually if they are communicating because they rock their heads back slightly, which is very evident even when walking. I have witnessed tigers using this same form of communication. The other characteristic it shares with the smaller felines is the crouched position when feeding. It usually eats its prey in a position to move rapidly if danger approaches.

Reproduction: Snow leopards (Panthera uncia) are reclusive except during the breeding season. Both the male and female can be seen interacting and hunting together during this time. Mating occurs from January through March. Females care for their cubs for nearly two years after birth.
A considerable problem for solitary hunters is finding each other when the female is in estrus. Scent marking is very prominent during the mating season. Both the male and female will scent their territories. Scent marking patterns of the snow leopard include urine spraying, scraping with the hind feet, and head and neck rubbing. The areas scent marked serve as “road signs” to the snow leopards. The addition of sex hormonal products to the urine and body secretions brings about a change in their odor to tell the male that the female is ready to mate. The male snow leopard also increases his rate of urine spraying at this time. The male will expand his home range in search of females during the breeding season. The leopards test the urine marks of other snows by drawing the odor over the vomeronasal organ in the roof of the mouth. The facial expression caused by this action is called “flehmen”.
The snow leopard breeds at the end of winter when the female comes into season. If she does not mate she comes into season again for up to 70 days. After mating, the female makes a nest among the rocks. She gives birth to two to four cubs after a gestation period of 93-110 days. Much darker than their mother, the cubs are blind for the first week, but they start to crawl within ten days. At two months old they can run and eat solid food as well as suckle milk. By mid-summer they follow their mother to hunt, staying with her until they are nearly two years old.
Some zoo studies suggest that snow leopards mate for life. However, most field conservation biologists can find no evidence to substantiate the conclusions of the zoo studies. Field studies all show that the snow leopard leads a life of solitude except for the brief mating period.  When the male snow leopard locates the female, there is usually a prolonged courtship. Initially, the female resists the male’s advances even though she acts provocatively towards him. Reassuring these dangerous felines that their intentions towards each other are mutual is accomplished by increased amounts of visual and vocal communications.

Prey: The snow leopard method of hunting is stalking and ambush. It is a very powerful and agile cat, capable of making leaps up to 50 feet uphill. It will rest in the major ridgelines, edges of bluffs and bases of cliffs. There the cat will wait and watch for prey. From these cliffs and bluffs, it will leap and fasten itself upon the unsuspecting prey. After the suffocating clamp of its teeth on the throat of prey, the animal is quickly killed and devoured. Like most carnivores, it begins with eating the stomach, ripping open the belly and eating the entrails before moving to the rump.
The choice of prey varies according to the species of game available. Ibex are the preferred prey. In other areas wild sheep such as the shapoo, bharal (blue sheep) are the prey of the snow leopard. It will also hunt tahr, goats, muskdeer, marmots, snow-cocks, monal pheasants and red-legged partridges. In Russia they take Persian gazelles and wild boar. In the winter the snow leopards are closer to the villages. This results in domestic stock being taken and when this occurs the cat is usually killed by the owners of the livestock.